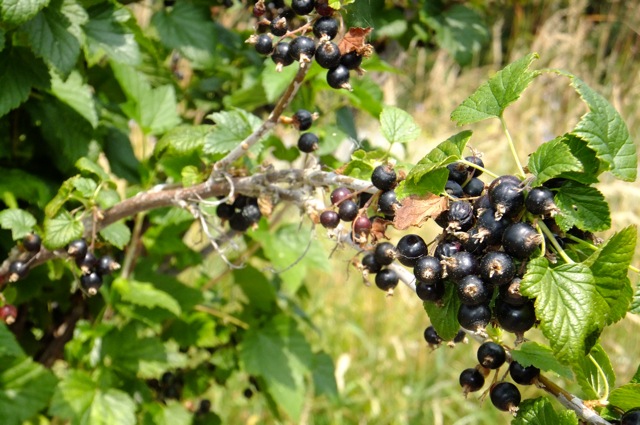 As I munched a couple of fresh black currants, I could not imagine them shrinking down to the sweet little dried currants I buy from the bulk bins at the co-op. Turns out dried currants are really tiny grapes originally from the region of Corinth, Greece. Maybe you knew that, but I didn’t! Now that I’m no longer confused, I can appreciate fresh black currants on their own merits! The big shiny berries are juicy and aromatic with tiny seeds. Sweet is not an adjective I would use for the ones I have tasted, but aromatic, spicy, and juicy are.

A good reason to include black currants in the landscape or food forest would be for their nutritional value. They have more phosphorus and potassium than any fruit; more iron and protein than any fruit save elderberry; and are highest in ascorbic acid (Vit C).

Where currants really shine are in preserves and beverages. Consider canning the fruit with cherries to make a preserve. It could be an interesting treat during the winter holidays served on crackers with goat cheese.

Mature size is about 3-5 ft high and wide. Space accordingly. Because they can tolerate more shade than many berries they grow well with trees, it’s just they produce less. Since they have shallow roots, currants work well with drip irrigation. Mulch helps them from drying out.

New branches come up from the crown and produce fruit the following year. Prune out wood older than 4 years old so most of the wood is one to three-years old growth.

Sustainable gardening is based on ecological principles. When we consider the home garden as an ecosystem, we develop the habit of observing patterns in nature and then look for similar patterns in gardens. Mature organic gardens, like natural systems are complex and rich. One of the goals of sustainable gardening is catching and holding resources.

Always start with the soil— enhance and maintain soil fertility by adding organic matter, so the existing soil microbes can thrive and flourish. Even a degraded site can develop a balanced ecosystem over time as the organic matter decomposes and forms humus. When the microbes of the soil web die, their decayed bodies act as slow-release fertilizer for garden plants. Focus on fertility includes compost, planting nitrogen fixers and other cover crops, adding manure, and growing plants that produce mulch.

We create more resilient gardens when we make connections with all of nature. Select plants that provide habitat for native insects, birds, and animals that can function together in a food web, as part of the home garden ecosystem. Layered gardens include trees shrubs and herbaceous plants that invite more beneficial visitors. The food web becomes more involved as rodents, snakes, and predatory birds engage.

When we design by grouping plants with similar environmental needs together there is less maintenance. Port Townsend’s mild wet winters and mostly dry summers are known as a Mediterranean climate. Native plants and plants from similar climates around the world, including Australia and New Zealand, offer many drought tolerant choices. Woody plants with edible fruits can be planted with an understory of perennial and annual herbs and edible flowers. Remember that perennials and annuals are more work than woody plants, so make sure they serve many functions!

Healthy, well-rooted plants withstand environmental stress caused by weather and poor drainage, and develop better resistance to insect pests and diseases. Planting in beds or mounds edged with paths makes a garden more inviting and eliminates the need for grass.

Gardening to the scale of the property lets us enjoy the intimate small garden or work with generous proportions of larger gardens to include the sky as part of the scale. Larger beds with masses of plants create bold simple patterns. Broadleaf evergreen shrubs and small trees can form the structure or bones of the garden. Strategic placement of flowering perennials and annuals allows us to enjoy the color with less work. 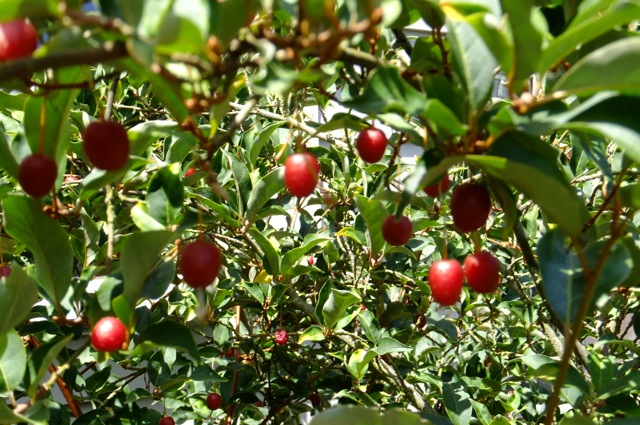 A friend of mine has moved to a beautiful old craftsman style-cottage in Port Townsend with a landscape full of edible plants. The other day a fragrant scent greeted me as I opened the gate. I turned down the side brick path before knocking on the door.

Was it coming from the flowering shrub with an abundance of pale-yellow tubular flowers? The shrub was humming with bees and other pollinators. What was it? The bronze colored scale on the tender stems made me think of Elaeagnus, the genus including Autumn Olive and Silverberry. But so many flowers! Compare the photo to the botanical illustration of the species below. 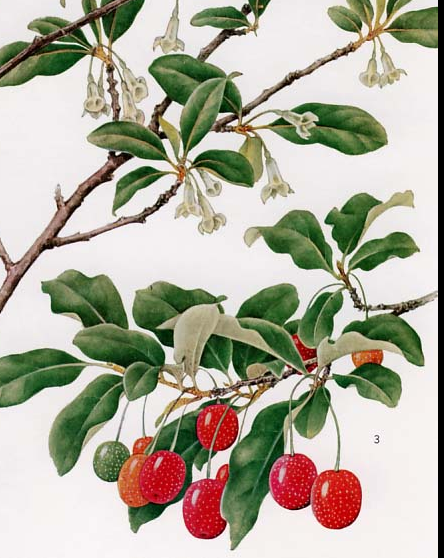 Knowing this was an edible landscape, my mind flashed to an unusual deciduous shrub I knew from a garden I once tended in the late 1990’s. What was the name-goji? No, but something like that. The scarlet berries dangled from stems tantalizing me. In late summer I popped them in my mouth to savor the astringent sweet-tart flavors. The longer they were left unpicked the sweeter they became, that is if the birds didn’t get them first.

But the shrub I remembered was never wreathed in blossoms. The flowers were sparse. The shrub was growing on the edge of the garden next to blueberries, rhubarb, and Abronia. The client had gotten the plants from One Green World Nursery. I remember reading their catalog that promoted Mountain Ash, Sea Buckhorn, and other ornamentals that plant breeders in Russia and and Ukraine had been selecting for larger, more delicious fruits. The Oregon nursery owners had gone on plant expeditions to bring back edible crops.

Elaeagnus multiflora, an Asian native has been cultivated in the US for many years. LH Bailey, one of my horticultural heroes discusses it in The Standard Cyclopedia of Horticulture in 1927. It is native to Japan where it is known as natsugumi. There it grows into a small tree. Other edible Japanese natives in the genus include Aki-gumi, E. umbellate, known here as Autumn Olive. The fruits of this shrub are high in lycopene, so goumi may be too. Unlike Autumn Olive goumi is not invasive.

But this shrub was not a random seedling, but a named variety, grown from cuttings, I’m sure of it. Plant breeders have bred it to produce more flowers. Compare the photo of my friend’s plant with this botanical illustration:

Landscape and Permaculture Use

This drought tolerant, deer-proof and pest-free shrub offers a special bonus; nitrogen fixing. Elaeagnus form symbiotic relationships with bacteria called actinomycetes that form nodules on the shrub roots and fix nitrogen from the air. This characteristic is found in some plants that are the first to colonize disturbed sites. These pioneer plants can grow in poor soils and enrich the soil.

Taking a cue from nature, the permaculture design approach uses Elaeagnus as an early succession plant. Consider planting it in a windbreak of tough plants in poor soil and five years later remove some replacing them with plants that require more fertile soil.

Researchers at the University of Wisconsin are exploring the potential for a commercial market for goumi. Planted in organic systems it can be grown like other hedgerow fruit crops like gooseberry, elderberry, serviceberry, and cornelian cherry. Plant them 4 feet apart and prune into multi trunk shrubs that are allowed to branch about two feet high and maintain at five or to six feet, so it can be mechanically harvested. 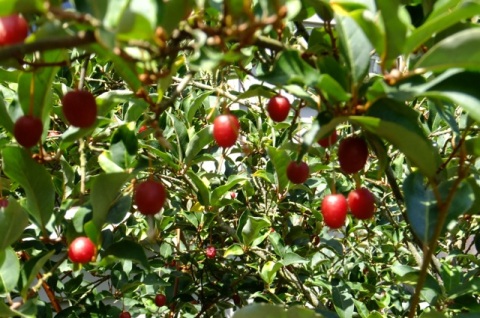