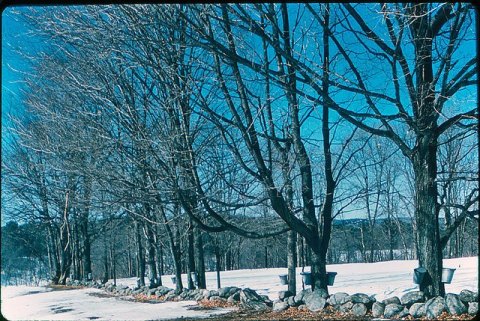 Most people know maple syrup comes from sugar maple trees, but did you know that forty gallons of maple sap is boiled down to make one gallon of syrup? This is the time of year (late February or March) when maple producers tap the trees and collect sap. Nowadays the process is pretty streamlined by running tubes from all the trees to central tanks. But, in the winter of 1977, when I spent six weeks on a dairy farm in southern Vermont, sap was still gathered in pails hanging from trees and manually carried to a tank on a sled.

Sap is only collected during the window of time before leafing out when the sap tastes sweet but is not tinged with chlorophyll. No sap flows in the dead of winter when the trees are dormant. Daily cycles of freezing and thawing stimulate a pumping action within the tree’s sapwood or vascular system. That winter on Clyde and Florence Twitchell’s dairy farm many days the temperature never rose above freezing, but when it did, I was filled with anticipation.

Each morning after milking, my boyfriend and I, along with the other young couple would wait for the farmer to declare if we’d work the sugarbush. Under the right ecological conditions sugar maple, Acer saccharum grows in dense stands. The deep shade of the forest canopy prevents all but shade-tolerant maple seedlings from getting established. If the weather were right and the sap flowing, we’d climb on to the 100-gallon sap-tank sled pulled by the bulldozer, and head out for the morning.

As the bulldozer slowly chugged down the slope to the sugarbush, I hung on and admired the handsome bare trees. The sturdy gray trunks were grooved with a distinctive bark. Then we would strap on Huron-style snowshoes and get to work. In the beginning of the season the farmer re-drilled holes and tapped in spouts. As part of the crew, I followed with metal pails and hung them from the spouts. Then someone would place a metal cover over each pail. Once the sap was flowing our routine involved visiting every tree, catching the sap that dripped out. As a farm hand, my job was carrying the pail containing the day’s harvest of sap to the awaiting tank, and then replacing the empty pail over the spout.

The snowshoes let me float over the soft snow, but I was clumsy and the long tails got in my way as I maneuvered around the trees. More than once I let the tails cross behind me. In trying to lift the lower snowshoe, I’d lose my balance and fall face forward into the deep snow, spilling the sap. It was cold wet work. When no one was looking I’d take a big gulp of sap from one of the buckets.

Most everyone knows the exquisite taste of real maple syrup, but the taste of sap, now that is something subtle. How can I describe the flavor that has lingered with me for almost 40 years? Cold and refreshing like a mountain stream, but with a mild sweetness that hinted of trees; it tasted like the promise of springtime. I remember wanting to bottle and drink the sap, never mind boil it! That is exactly what people in South Korea do. Maple sap is considered a spring elixir called Gorosoe “good for the bones”. There is even a legend about a 9th-century Buddhist monk who was restored by the sap. The nutrient-rich sap provides the tree with calcium, potassium, and other minerals for the coming season. The 2% sugar content of maple sap is the product of the previous summer’s photosynthesis. The maple converts the stored starch into sugar and it dissolves in the sap.

At the sugar shack, the primitive processing plant, the farmer’s wife would stoke the fire in the evaporator with dried slats of white pine from a local sawmill. As sap flowed through channels in the huge metal pan, steam filled the shack until the water content was cooked off. Maple syrup not only concentrates flavor, but also the sap’s minerals. This makes it one of the healthiest sweeteners available. We stopped collecting sap when the nights got above freezing and the trees no longer pumped the sap into the buckets. I’m glad I had the opportunity to work in a sugarbush and be part of the New England tradition.

(The photos came from Flicker’s Creative Commons. The top one from Keene Public Library, Keene New Hampshire,1975. The bottom from Lezumblaberenjena, in Montpellier, Quebec, Canada.) 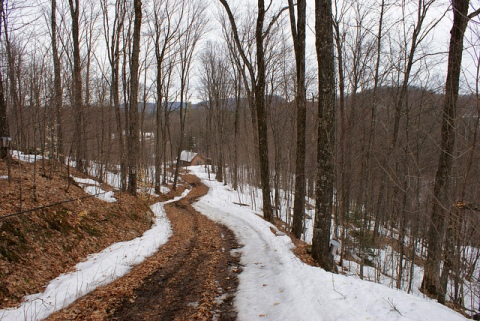