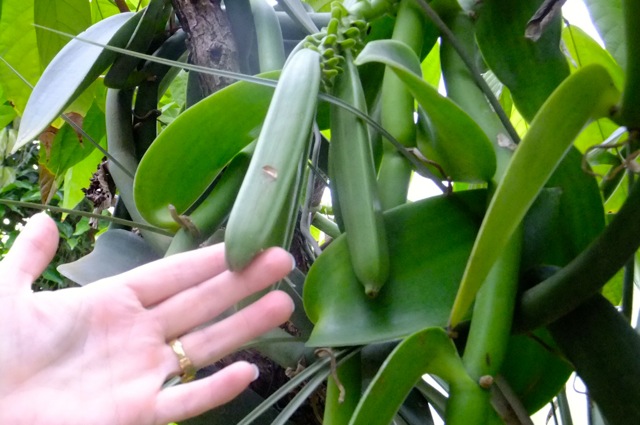 As I reach for the brown bottle of vanilla extract to add a little to my coffee, I stop to reflect on the journey from orchid vine to the processing of the vanilla beans. At the same time I appreciate the fair trade options available now.

At the Puerto Vallarta Botanical Garden last summer I visited the vanilla trail where orchid vines crawl up tree trunks. My friend Ariel and I explored the forest in the muggy August heat and we were thrilled to find some thick green pods fruiting. We were told they would not be harvested until November.

I was flooded with memories of a vanilla plantation I stayed at in Costa Rica seven years before, where row upon row of native and introduced trees kept out the sunlight with a high canopy of leaves. The orchid vines grew up short trees, known as tutors, and posts made of y-shaped tree limbs. We ducked under long poles that formed the trellises and our feet sunk into the deep leaf litter. Henry Karczynski’s plantation was a biodynamic farm near Quepos on the west coast. It was early December and the fruit had been harvested and was drying in the sun.

If you have ever wondered why vanilla is the second most expensive spice, it has something to do with the labor intensive growing and curing process.

Tiny bees native to the Mexican tropical lowlands pollinate it in the wild. When plant explorers tried to move the crop and start plantations in other countries, it failed until the mid-1800s when a 12-year-old slave on the island of Reunion developed a technique to hand-pollinate the orchid flowers with a toothpick-like stick. Since each flower is only fertile for only a couple of days, astute monitoring and rapid handwork is called for. Watch this YouTube video to see hand pollination at 10.11 minutes https://www.youtube.com/watch?v=Nhju7wj-LnI

Killing or wilting stops the growth and activates the spice’s enzymes—usually by scalding in hot water for several minutes, or freezing. Sweating initiates more chemical changes and in the Mexican processing method encourages heat-tolerant bacteria to grow. This step involves placing wilted pods in boxes or wrapping them in burlap bags to increase humidity. By alternating the sweating with daily sun drying, the pods ferment rather than rot. It is only at this point that the characteristic aroma begins. After slow drying for up to two weeks the beans become wrinkled, supple and shiny. Careful attention at this stage is needed for even drying. Conditioning continues the curing by drying for two to six months allowing the flavor and aroma to fully develop. The final step is grading and bundling the beans according to visual and aromatic characteristics.

At Henry’s Villa Vanilla I helped with sweating the pods. Each morning we pulled burlap sacks out of 55-gallon drums, emptied the vanilla onto drying racks and spread out the pods. The shiny wrinkled pods were so fragrant, I immediately thought of alcohol. At night we gathered them up and placed them back in the drums. Many years before, Henry had been with the Peace Corp in Madagascar where he learned vanilla cultivation. 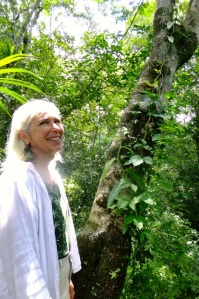 Much of the world’s crop comes from Madagascar. A British journalist wrote a scathing report in 2010 about 20,000 children working in vanilla plantations instead of attending school. Read Dan Mc Dougall’s article in the London Sunday Times: http://stopchildlabor.org/?p=2072 Much like other tropical crops that rely on exploited labor and chemical inputs for production, organic and fair-trade vanilla is available.

When Ben and Jerry’s Ice Cream was questioned as to sourcing their vanilla product, they scrambled for an answer. They sought corrections by promoting fair-trade vanilla on their website. http://www.benjerry.com/values/issues-we-care-about/fairtrade. They claim to be purchasing more vanilla from family farmers in Uganda. Small family farms in tropical regions around the world now grow fair-trade vanilla intercropped with cardamom, turmeric and bananas. A remarkable story about fair trade vanilla revolves around Lulu Sturdy, a British woman who left her life in the modern world to run the estate of a deceased uncle, and the local farmers she came to love and help empower in rural Uganda. http://www.independent.co.uk/news/world/africa/lulu-sturdy-vanilla-guerrilla-407771.html

Next time you taste the aromatic delight of vanilla, ponder the orchid and the people who cultivated it.