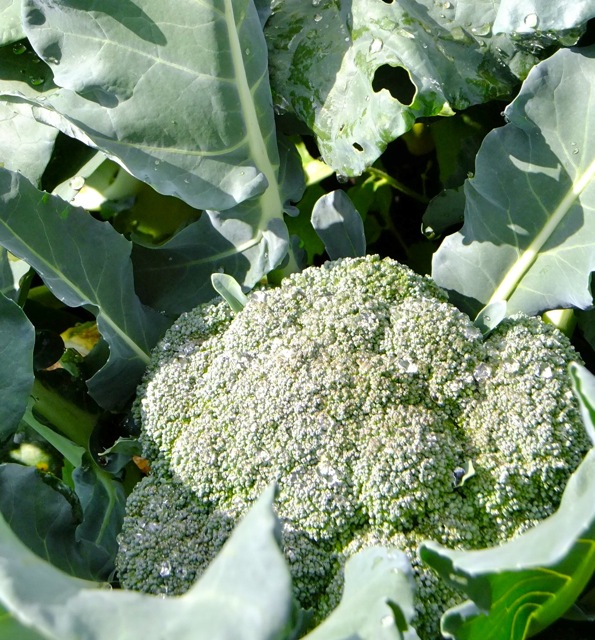 On Friday I helped Tinker Cavallero collect research data on broccoli variety trials for Organic Seed Alliance (OSA). Farmers and researchers across the northern US states are testing open-pollinated varieties that are selected to thrive with organic systems rather than relying on standard hybrid seeds dependent on industrial farming systems.  Organic markets call for crops with superior flavor and high nutrition that can thrive with low-input fertility under pressure from pests and weed completion.

For the last four years Tinker has been a field manager collaborating with local farmers, overseeing interns, and running the trials. Her work involves examining plants for key traits and recording the data as part of a wider effort called Northern Organic Vegetable Improvement Collaborative (NOVIC). She works closely with OSA staff scientists as they engage with farmers in an innovative participatory plant-breeding program.

When most of us think of open-pollinated (OP) seed we think of heirlooms, or classic vegetable varieties that have been passed down for generations, contributing to biodiversity and our shared cultural history. You may be familiar with or even may be a member of Seed Savers Exchange, an organization of gardeners and farmers that preserves and distributes seed of endangered food crops. Saving seed is a matter of maintaining the genetic character of a crop, however the variety trial program I worked with on Friday concerns breeding new types of seed.

Until recently, almost all commercial, vegetable-crop breeding was geared to hybrid seed used for conventional production that relies on chemical fertilizers and pesticides. Multinational companies that sell hybrid seeds often funded the research. Since hybrids result from crossing two separate parent lines, they will not produce viable seed that has the same traits of either parent.

These hybrids are called F1 meaning they are the first generation after a cross. Seed breeding is a time consuming and not always profitable endeavor. Because only a few giant agrochemical companies own most seed they choose what is available.

Based on the named crop varieties that are no longer available, the UN’s FAO estimates that 75% of crop biodiversity has been lost.

Now demands are finally changing and the market for organic, open-pollinated seed is expanding.  Ten years ago, when Organic Seed Alliance (OSA) began, organic plant breeding programs were almost unheard of. Now, the organization has nurtured an alliance among the scientific community.  The USDA-funded NOVIC project is a collaboration including OSA, several universities, and many farmers working together to breed organic seed. The NOVIC website explains why the group is breeding broccoli and describes the plan.

Dr. John Navazio, senior scientist at Organic Seed Alliance says the organization is breeding “heirlooms of tomorrow.” For organic market gardeners and truck farmers, this means vegetables that produce well under variable field conditions, including climate change. Farmers can save the open pollinated seed and regrow it every year. Also, organic food certifiers now require farmers to make a strong effort to use organic seed.

Tinker has been monitoring organic broccoli varieties on several farms here on the Olympic Peninsula. Friday we examined field trials at two Chimacum farms, Red Dog and Finn River.  She told me that these trials were offspring from plants created by crossing six F1 hybrids and 17 Oregon State University inbred selections, followed by several more generations and populations selected by farmer breeders. It is amazing to think about how much time and consideration is needed to create a new variety!

Thirteen broccoli varieties are being tested for their ability to withstand summer heat and for ease of harvest. The new OSU selections had matured about 10 days earlier and had already been harvested and rated by the time I visited the trial plots.

On Friday, Tinker collected some of the last data for this year’s trial. The varieties that were now mature were the original hybrids: Arcadia, Belstar, Bay Farm, Marathon, and Windsor. First we walked through each trial plot and counted the number of broccoli plants that were immature, prime, (or ripe), and overripe. We measured and recorded a number of criteria including head size, head height, and canopy height. The last two will be used for selecting taller plants that require less bending for hand harvesting. An exerted head—one that rises above the foliage—reduces the need for trimming while harvesting.

Trimming ease refers to the number of leaves that must be removed from a six-inch stem. Tinker confidently determined this as she harvested each of the five samples per plot. As we moved back and forth in the plots we noted disease and insect pest damage. One goal for the breeding program is to select plants that are more resistant to pest problems. We determined regrowth potential by checking for bud development in the leaf nodes. Market gardeners can harvest another, smaller crop by cutting these side shoots.  Each of the five varieties was rated for head firmness, bead size, and head color.

Looking carefully at each broccoli plant was like botanizing, or better yet, it was like collecting flowers for fresh flower bouquets. Broccoli of course is a head of immature flower buds. Each one is known as a bead. The horticultural term for each branched stem that makes up a head is floret. Depending on the weather, an immature head two-inches in diameter can expand to five inches in a few days. In the cool of spring and fall it can take much longer. A head can be large but still immature. I have harvested broccoli years ago on my own farm in Missouri and more recently doing work trades on CSA farms, so I thought I was qualified to choose ripe broccoli, but looking at heads of different varieties and consciously rating them was a new experience. Also I had never noticed the different ways heat stress can manifest in broccoli.

Tinker has a razor-sharp memory and has honed her observation skills during 40 years of farming and gardening. She showed me the subtle differences between over ripeness and heat stress. Although some varieties mature with a flat head or compact dome, several varieties have bumpy heads when they are fully ripe or prime. Typically broccoli heads differentiate, or start to show signs of separate florets, when they are overripe and ready to flower. Gypsy variety responded to heat stress by sprouting leaves in the middle of the head.  Another sign of heat stress is starring or resetting, indicated by an undeveloped center bead of a floret compared to outer beads.

Color is another trait in the selection process. Dark green or green with a slight purple tinge is most desirable and gets the highest rating while medium or pale green have a low rating. I knew purple broccoli existed but Tinker explained that a purple tinge is part of the complex genetics of Brassica oleracea, the botanical name for broccoli and other cole crops. Apparently there is a whole spectrum with some varieties having more anthocyanin, a purple pigment. The heads are weighed and noted. Then Tinker went to the office and entered the data that will be used to rate the open-pollinated varieties.

Many years of research go into developing a new crop variety. Breeding open-pollinated varieties for use with organic systems is turning the tide from corporate-dominated patented hybrid seed to providing seed that everyone can use and save. The old paradigm makes farmers dependent on a handful of seed corporations that gear plant breeding to crops that perform with high levels of chemical fertilizer and pesticide. The goal of NOVIC is to identify the best performing existing varieties for organic agriculture, and educate farmers on organic seed production and plant variety improvement. Tinker recognizes the importance of working closely with the farmers who will use the seed. She is an astute farmer who brings many years of direct experience to meet the challenges of variety trials.

The website http://eorganic.info/novic/broccoli explains why the group is breeding broccoli and describes the plan.