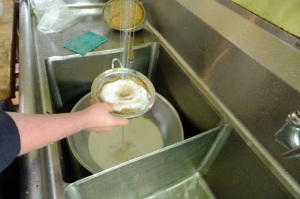 The folks at Golden Rule Garden, a project of Ecology Action contributed two gallons of recently grown and dried quinoa to the Ecology Action 40th Anniversary Celebration, last weekend. Ellen Bartholomew, garden manager, warned me that I needed to repeatedly wash the quinoa seeds (technically a pseudograin because it is not from the grass family, rather it is related to spinach, Swiss chard and the edible weed, lambsquaters). Well, I didn’t listen.

These were her instructions:

Place 1 to 2 cups quinoa in a blender. Fill with water almost to the top. Blend at low speed for a minute or two. Drain the sudsy water, add fresh water rinse twice and repeat. Repeat again. Do this however long it takes for the water to come out clear, not sudsy.

Now the problem is, as you probably know, quinoa is high in saponins, a chemical constituent that is not essential for basic metabolism, but worth it to the plant to produce for some reason. Saponins taste bitter. I love bitter food and I spit out quinoa that was not properly rinsed. The birds in the field don’t eat quinoa, so the saponins are protection against predation. Good strategy.

There is not a blender in this otherwise complete catering kitchen. So I used the high-pressure dish washing faucet to rinse and rinse. Well, after an hour and a half of trying to wash about 10 cups on the day of the event, I got frustrated.  This is not something you can do in advance because in less than 24 hours the moistened quinoa will sprout. Finally, when Fenanda and Luke, interns at Golden Rule, showed up at the Frey’s kitchen, I understood. Luke calmly placed some of the quinoa in a large mixing bowl and added water almost to the top.Voila! The colorful calyx of each tiny seed floated to the surface and Luke poured them off. I had not been adding enough water. Quinoa also has a hard shiny coat surrounding each seed. Fenanda and Luke washed away the bitter principle and we all ate the most delicious, nutritious home-grown quinoa!

I read the email this morning.  Fernanda said they had harvested quinoa and would start threshing it today. An intern from Ecuador, Fernanda had told me about growing up in Riobamba, in the Andes, where her mother has a restaurant that serves traditional food, including quinoa. Last week I took a picture of her standing beside the quinoa, a variety from the USDA seed bank, a multi-hued one. Fernanda led me to the drying loft of the barn, where bundles of rye, teff, and garlic were hung to dry. I arrived at the garden at lunchtime so, she got me started and went to take a break. I was excited to get started. The last time I cleaned quinoa was when I worked at the Abundant Life Seed Foundation fifteen years ago. 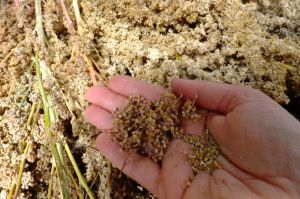 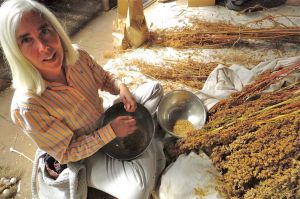 showed me how they first weigh the whole plant to calculate the dry biomass, an important step in collecting data for their research in determining yields. Then the seeds are gently stripped off the stem to avoid gathering unnecessary bits of stem and debris.  One batch I worked on was not completely dry. The colored stems were so heavily ribbed that they reminded me of rainbow chard when it has bolted. Much of the seed stayed wrapped in the dried chaff, yet the grain (pseudograin see archives) looked completely mature. The other batch was much faster to process because the stems were brittle.  I rubbed the dried flower heads between my hands and let the seed fall into a bowl. I worked alone for a few minutes and then two volunteers returned to work on amaranth.

Later, Ellen Bartholomew, the garden manager at this site, one of Ecology Action’s research gardens, joined me. She showed me a faster way to process grains.  After stripping the dried seed heads, we pushed the quinoa through seed screens.  The best arrangement was  #5 on top and the fine mesh on bottom. The most mature quinoa fell through by shaking the screen, whereas we needed to rub the remainder through the screen. The stems and coarse material remained on top. The finest chaff sifted through the fine mesh screen, leaving very little debris to remove in the last step.

Winnowing is a skill that reminds me of a chef tossing an omelet.  I remember working as a cook in an Italian restaurant and told to practice with a skillet of dry beans. By flipping the wrist I learned how to turn a pan of sautèd veggies without a spatula. Holding a bowl lightly with two hands and standing in front of an electric fan on low, I tossed the quinoa; the chaff sailed through the air, onto the floor. Quinoa is a good one for beginners to learn with because the chaff is so much lighter than the seed, thus it separates easily. To make sure the seed is evenly dry, the quinoa will be kept at the temperature it will later be stored at before being placed in a sealed container. If they are not damp, and don’t stick to each other, unlikely in this dry air, then they will be ready to go into storage containers. Ecology Action does lots of quinoa trials; this mountain valley provides the ideal growing conditions, hot days and cool nights.

I wrote this for the Abundant Life Seed Foundation Newsletter back in 1999 when I worked there.

Quinoa (pronounced keen-wa) known to the Incas of the Andes as “Mother Grain” is an attractive plant, nutritious crop, and a delicious food.  If you have ever cooked this psuedograin you have seen the funny little squiggle or partial spiral of the seed’s germ.  Let’s take a look at this interesting crop.

The plant grows high in the mountains of South America, in an area known as the altiplano, where it withstands extremes of climate– not only freezing temperatures and poor soil but also high intensity of sunlight.  The Queche Indians, heirs to the Inca legacy, have grown the “mother grain” for 3,000 to 5,000 years and developed many varieties adapted to various conditions.

It is not a true grain from the grass or cereal family, but a member of the Goosefoot family.  Quinoa is related to spinach, orach, and beets, but most closely linked to the weedy edible lamb’s quarters and epazote the pungent, culinary herb from Mexico.  Like them, Quinoa has leaves with toothed margins and a powdery texture. The plants grown at the Abundant Life trials garden grow 3 to 5 feet tall.  As the autumn air turns crisp, the foliage turns a stunning array of yellows and purples. The flowers have no petals–they look like tiny green balls with dense, pyramid shaped clusters of seeds, that mature into an attractive golden color.

The individual millet-sized seeds are flat on two sides.  You may recall washing the “grain” before preparing it.  That’s because the seed coat has saponins, a bitter property that protects it from the intense sunlight and repels insects and birds.

Most quinoa exported from South America has been mechanically buffed to remove the saponins in the outermost edge of the kernel, (thus is nonviable as seed stock) in a process known as pearling.  Some seeds bypass the machines, so it is still advisable to rinse it before cooking.

The embryo of quinoa takes up a greater portion of the seed than normal cereal grains, so the protein content is higher.  The National Academy of Sciences calls it “one of the best sources of vegetable protein in the vegetable kingdom”.  It is also high in calcium and iron.

Quinoa is prepared by simply boiling but traditionally it was used as flour or dry roasted.  Try this recipe next time instead of plain rice:  Place 4 cups of water in a pot with 1/4 c wild rice and a piece of dried kombu or other sea vegetable (for flavor and nutritious trace elements).  Bring to a boil and after 10 minutes add 1c short grain brown rice.  Lower heat and cook another 25 minutes Add 3/4 c of rinsed quinoa.  Let it simmer  15-20 minutes  Enjoy the nutty, nutritious flavor of quinoa as a regular part of your diet.